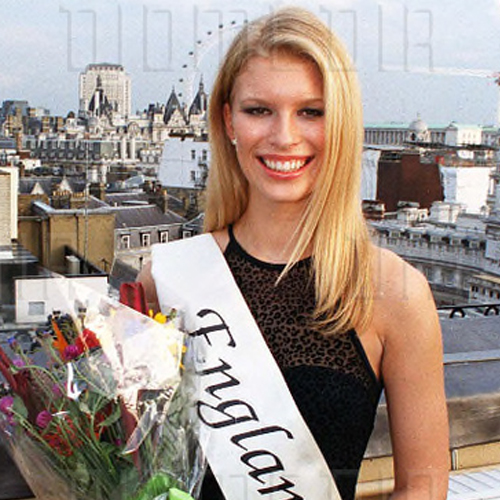 Leicester born Sally Kettle won the title of Miss England in 2001 at the Trafalgar Hotel in London.

Later that year she flew to Sun City in South Africa where she competed in the Miss World competition. During her visit, Sally enjoyed countless magical times but has always maintained the highlight of her trip was to dance with the former president, Nelson Mandela.

During the last ten years, Sally has competed in numerous pageants. In 2000 she won Miss Hawaiian Tropic National and subsequently went on to the internationals in Las Vegas. Later, she visited Singapore to compete in Miss Queen of Clubs.

Sally comments “I enjoyed some of the best times of my life competing in pageants.”

” What more could any girl ask for? I have had the chance to visit so many fascinating countries with their incredible treasure trove of people, culture and customs – I wish I could do it all over again.”

Her ambition in Miss World was to become a DJ. “I achieved a huge ambition by working as a DJ around Europe for three years. I played for Vodafone at the UEFA Champions League finals which took place in Athens and Moscow.”

After she gave up her title, Sally co-presented the BBC Liquid News with royal correspondent Jenny Bond. The radio management company quickly spotted Sally as a unique talent and thrust her into the limelight hosting her own radio show.

Sally has been modelling since the age of fourteen and is currently signed with MOT, Europe’s largest model agency. Her face has graced the covers of numerous top women’s magazines and she has featured in Project Catwalk and countless other fashion shoots.

Sally has never been somebody to let the grass grow under her feet and her enthusiasm for new challenges took her in the direction of a photography course at Kingston College. It was here that she discovered a natural love of working behind the camera and a unique ability to put her subjects at ease. Three years later and Sally has a portfolio that encompasses national press coverage, book covers and private commissions. Sally is currently working as a professional photography with a growing reputation for specialising in celebrity portraits.