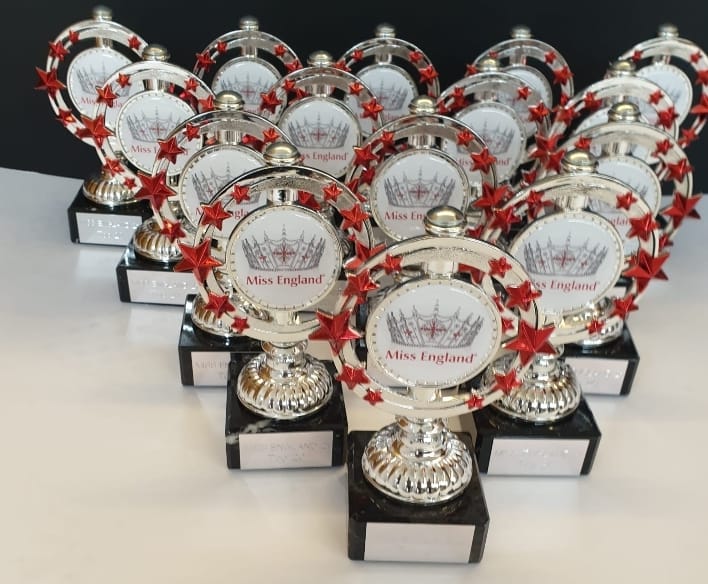 By angie20th October 2022No Comments

In the lead up to the Miss England 2 day National final , various awards were held to help select the winner .

Each of the contestants who made it to the shortlist on the night of the final received a trophy sponsored by The Trophy Parlour in Leicester .

To kick off the Miss England Live contest  -a sportsround was  held at the Leicester Football Dome and culminated with a Penalty shoot out between the top 10 contestants following an intense workout with Rob Hughes PT .

The top 3 were – L-R  Emily Cossey from Chelsea , Leah Carter Welch from South London & Alice Jones , a paramedic from Walsall . 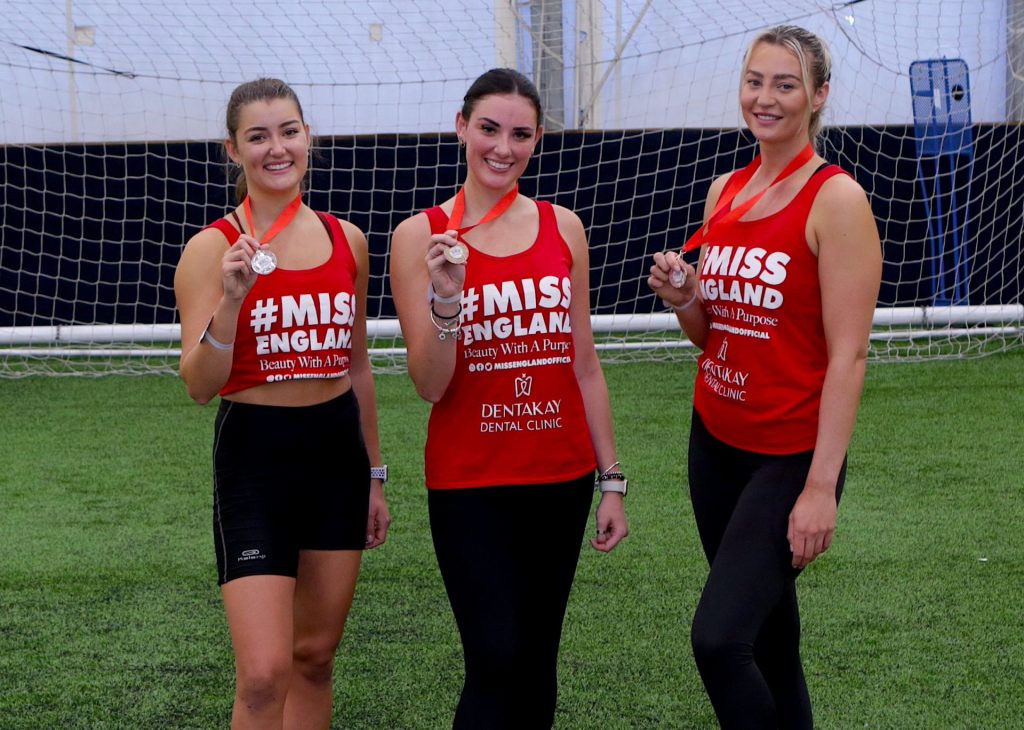 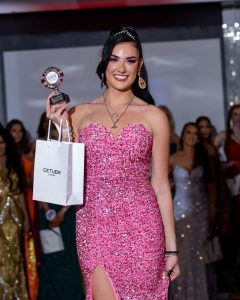 Leah  won the Miss England sports award  and collected her winning sash at the Holiday Inn Birmingham Airport and her place in the final 12 .

Leah  is a sports science student & said ” I didnt do any specific training for the Miss England sportsround,  however I train in boxing and cheerleading 3 times a week . I am also a trainee PE teacher so im exposed to sports and exercise on a daily basis ! ” 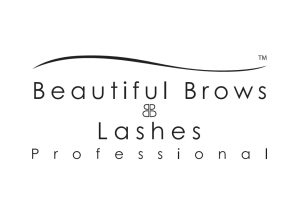 All contestants had the option of entering the fast track round with the chance to win a place in the final 12 round .    Watch Alice’s video here 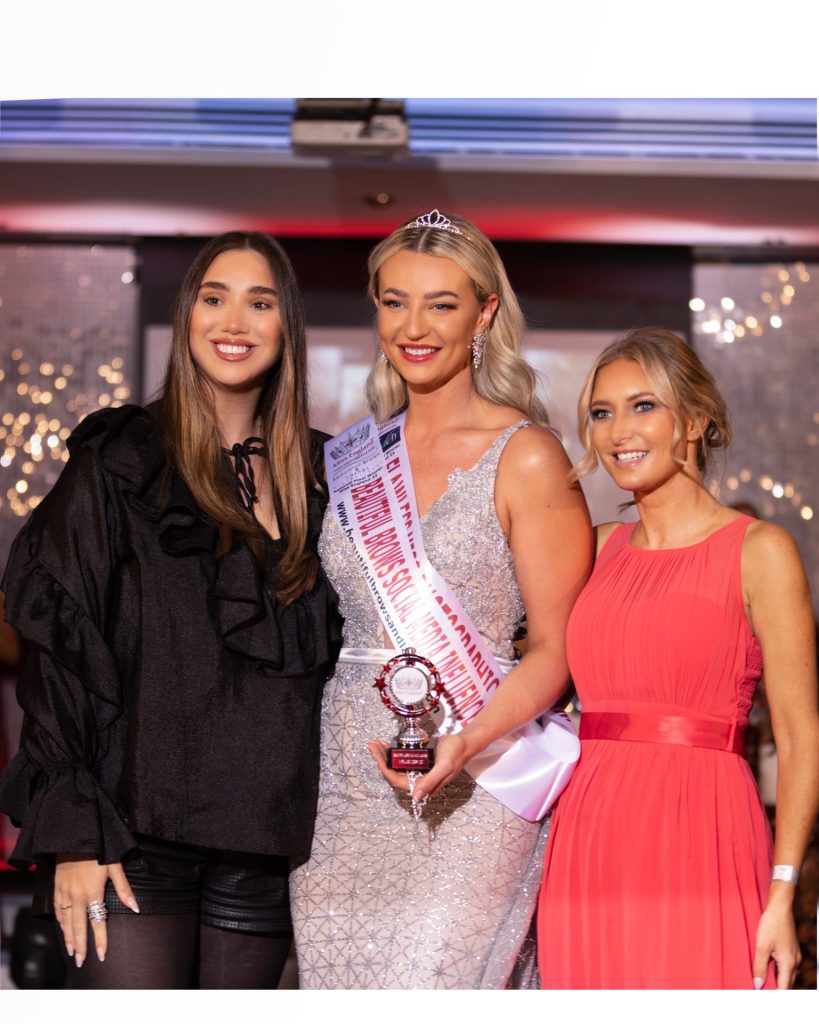 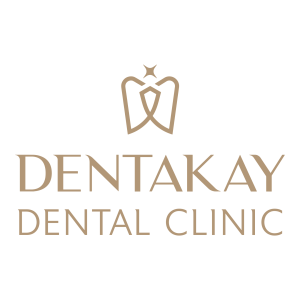 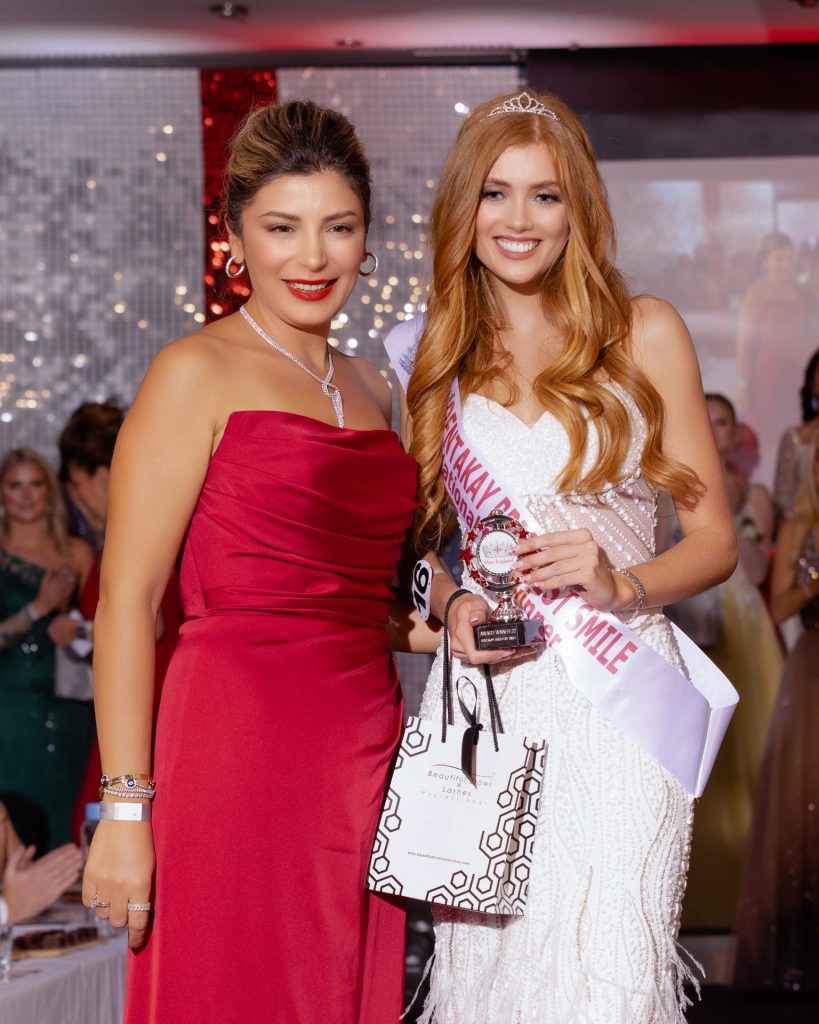 The founder of Dentakay Dental Clinics “Dr Gulay’ was a judge for the Dentakay Brightest Smile award . Contestants were invited to submit images of themselves showing their best smile using the dentists hashtag #wemakeyousmile  . Dr Gulay chose Jessica Gagen in the first part of the grand final as their winner .

The national final judges all voted for Jessica to win the Miss England crown after she reached the final 12 and delivered a powerful speech about how she wants to encourage more women in the STEM .

Jessica is a Aerospace Engineering student and wants to be an astronaut and revealed earlier on in the contest how she was bullied badly as a child for being a redhead ! 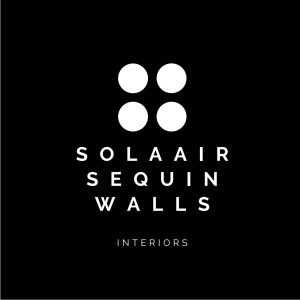 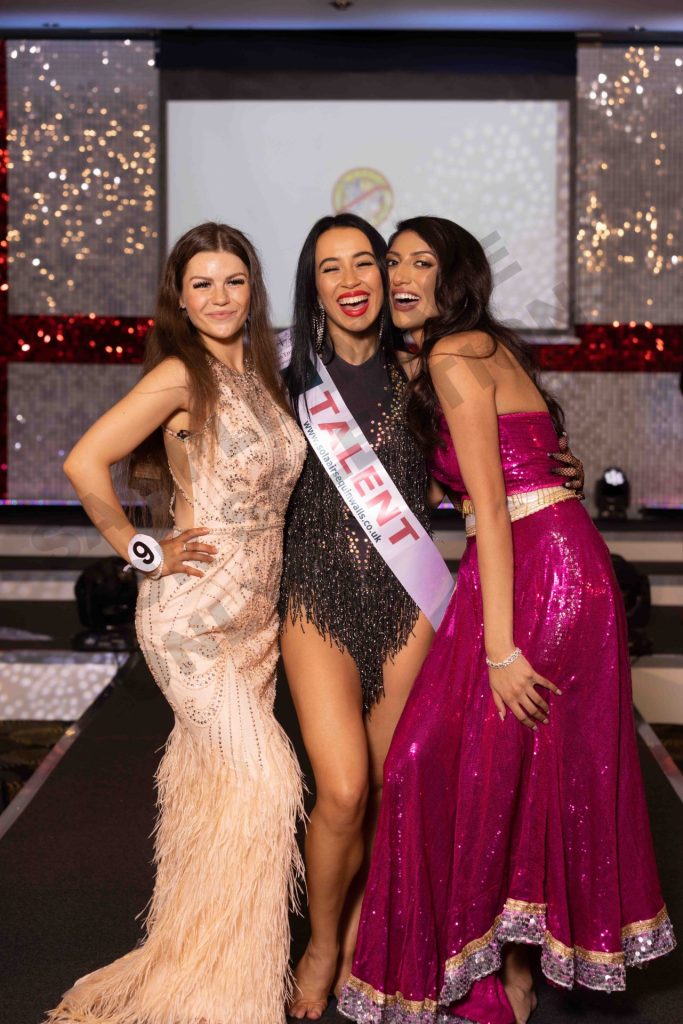 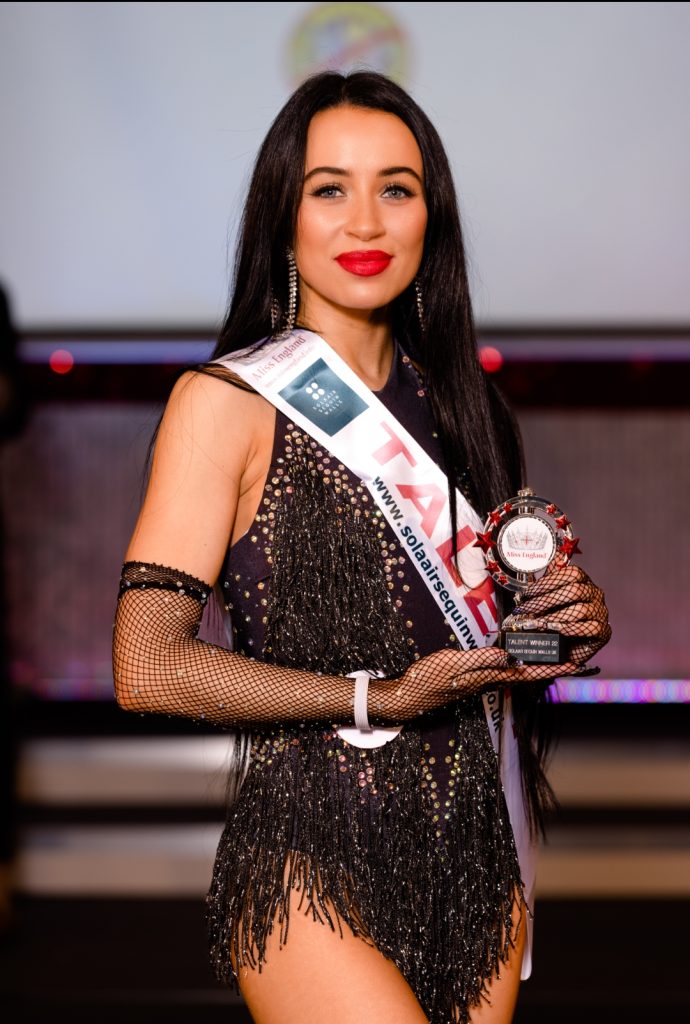 As the Talent winner , Georgia was fast tracked through to the Miss England TOP 12 on the day of the final . Click here to read more about the talent round ! 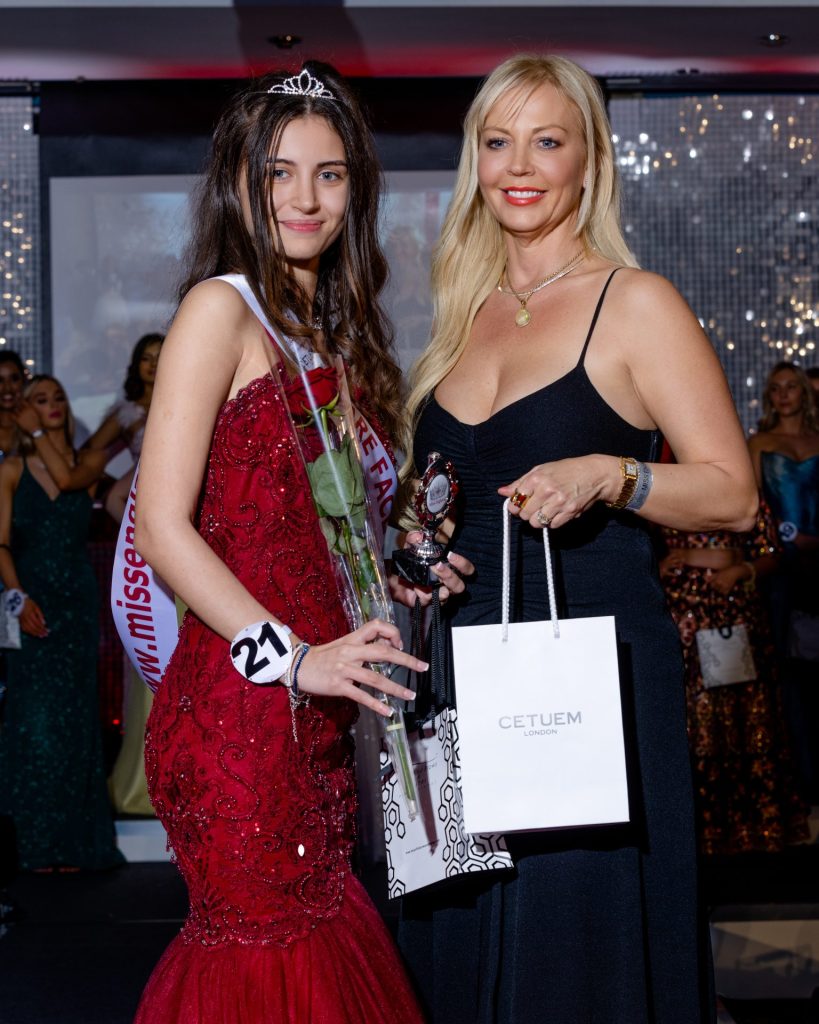 ITVs “Lorraine”  Show filmed Melisa participating in  the Miss England contest  Live on the morning of the final at the Holiday Inn Birmingham Airport and also won the Publicity Queen award in the contest! 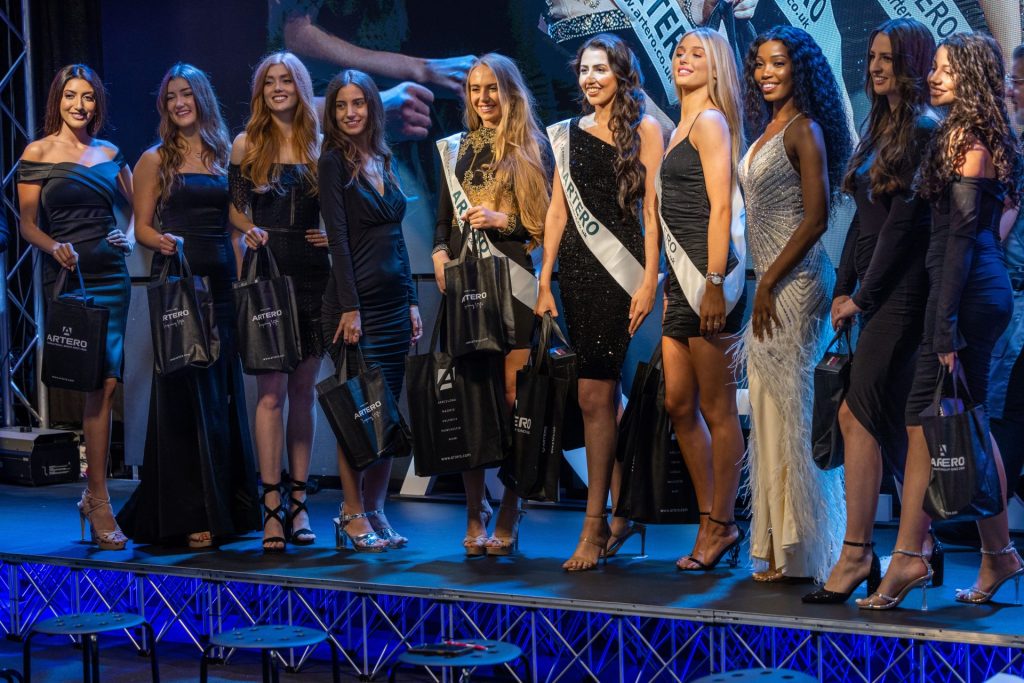 The Miss England 22 Finalists were invited to submit a video of themselves , styling their hair using an Artero hairbrush that they were gifted . Artero ambassador “Eric Way then invited 12 finalists who in his opinion had the most beautiful Hair to compete on a catwalk for the Most Beautiful Hair award . A top 3 were selected at Salon International by the brand who were Milly Everatt ( North Lincs) , Neha Dhull ( Surrey) and Paige loren Cannon James (Liverpool) GROUP PHOTO GEM FOTO 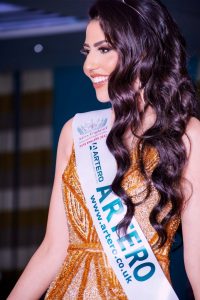 The winner of the Artero Beautiful Hair round was then announced on the first night of the MISS ENGLAN two day final which was Neha Dhull , a social worker from Surrey . Here is she wearing her Eco outfit with the theme Fashion Through the Decades ! 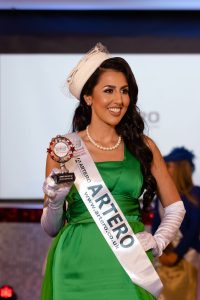 Neha also won the Peoples Choice vote on the Miss England app receiving over 30,000 votes by the time the vote closed on the 16th October 2022 and reached the final 5 interview in Miss England 2022.

BEAUTY WITH A PURPOSE – TOP FUNDRAISER is COREL JO ANTWHISTLE 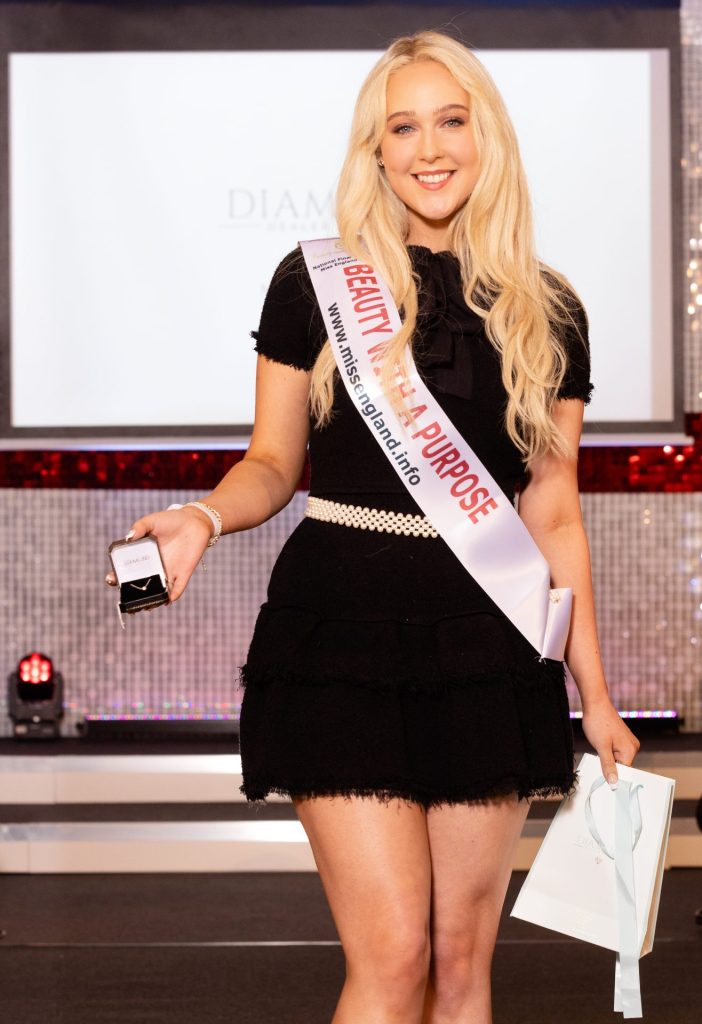 As always.  the Miss England finalists came up with innovative ways to raise funds for charity in the lead up to the Miss England grand final. An array of fundraising activities included Climbing the O2 , Sky Dives , a Wing Walk , bake sales and sponsored walks were just some of the activities the contestants themselves arranged .   Between the finalists , contestants managed to raise over £32,000 split between the Miss World Beauty with a Purpose charity and Papyrus , the Prevention of Young Suicide charity  .  Over £7,400 was raised by Corel-Jo , a fine art student from Newcastle ! Corel-Jo was then fast tracked through to the Miss England Grand final . Corel-Jo was the highest scoring contestant  in the contest from the region which she lives , and has now been awarded the title Miss Newcastle & a diamond necklace from Diamond Dealer Direct for all of her fundraising efforts  as she intends to enter Miss England again! 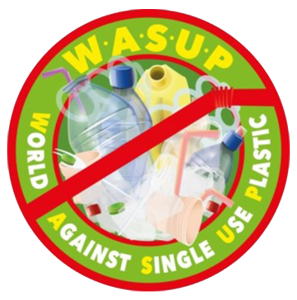 WASUP QUEEN OF THE DECADES 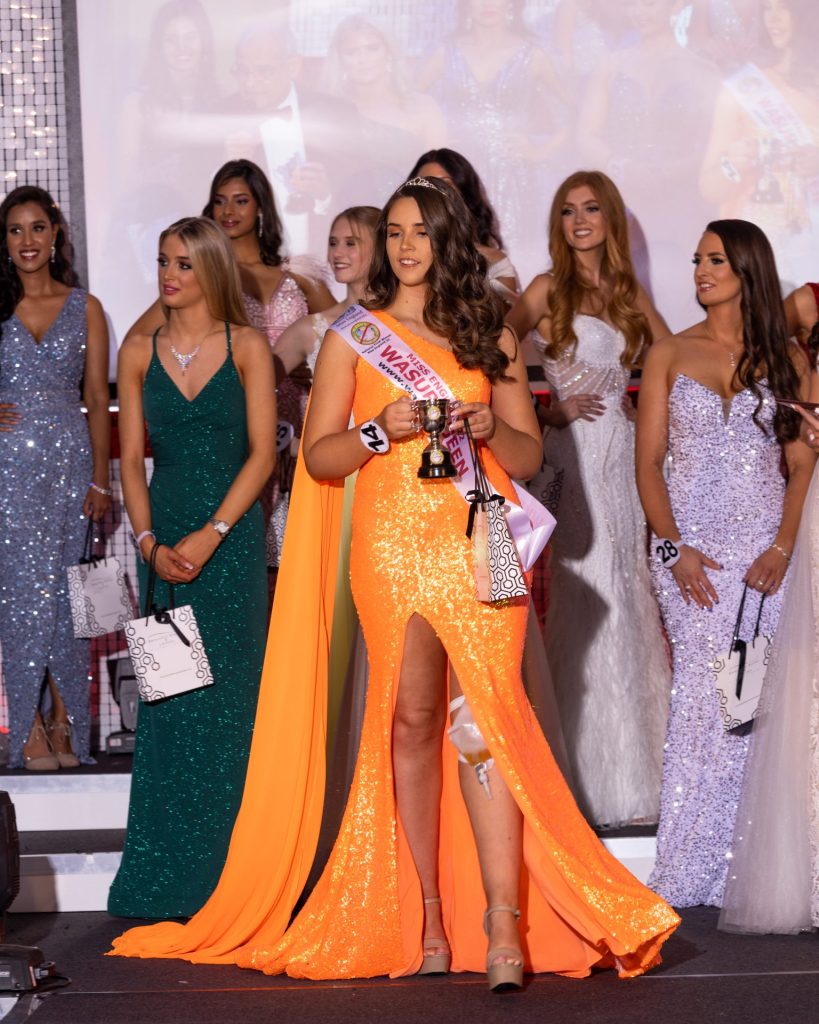 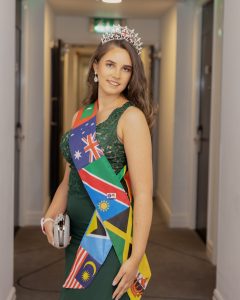 WASUP QUEEN OF THE DECADES For the first time, Professor Rashid Gatrad founder of WASUP sponsored the Miss England ECO round to promote  the World Against Single use Plastic campaign .This round was renamed the WASUP QUEEN & contestants were encouraged to get involved with his campaign in the lead up to the contest & get involved with litter picks and promote recycling to the younger generation as well as creating an elegant outfit to wear on the catwalk at the final from recycled materials or something that has been recycled.
Following her immense work with WASUP since 2021 , there could be no other contestant more deserving of the crown than Jennifer Carless , who continues to work tirelessly to promote the campaign despite suffering a crippling illness and numerous hospital visits during the last year .  Jennifer continues to spread the WASUP message across the world. 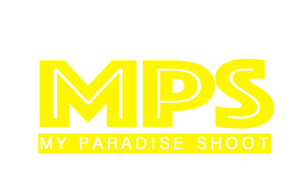 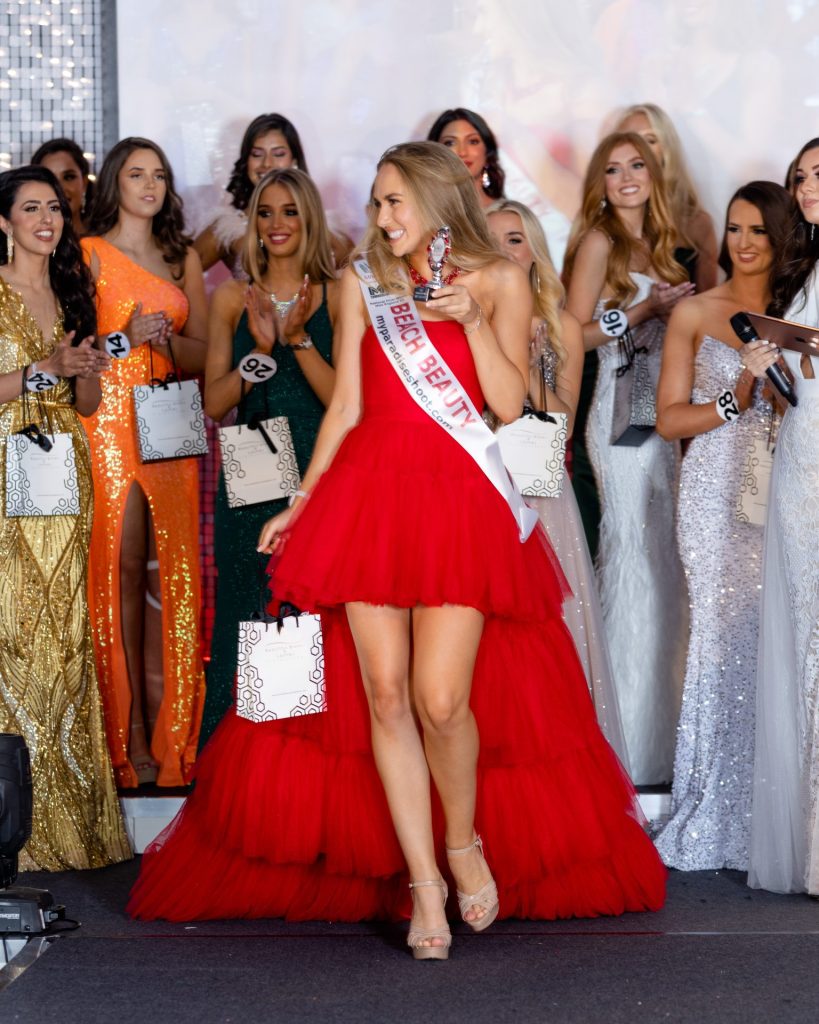 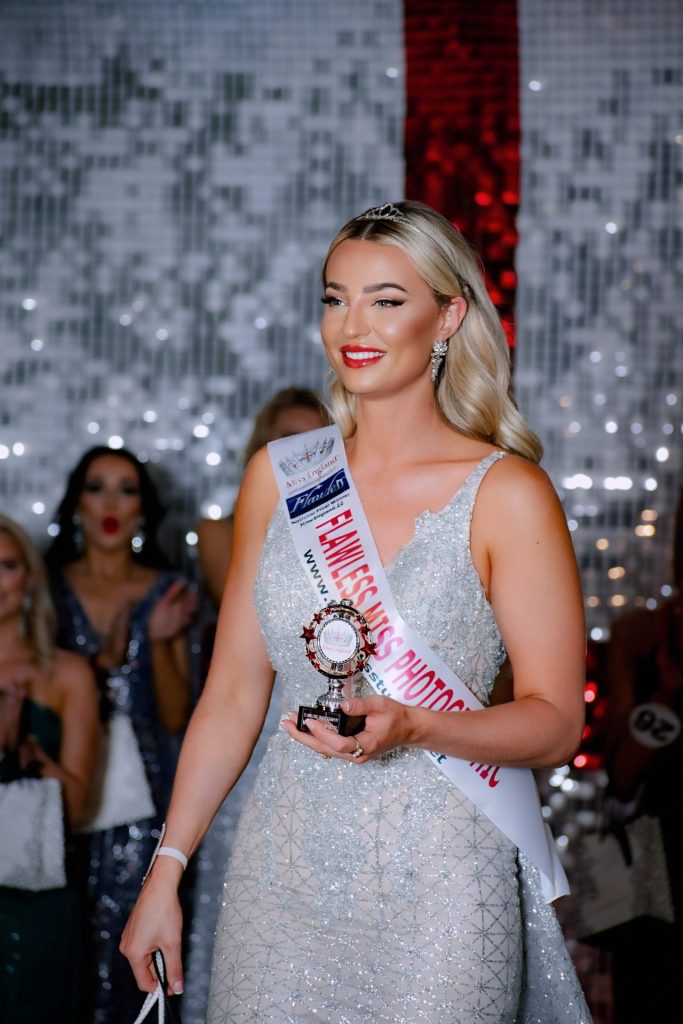 The Miss England finalists were all invited to Flawless Photography studios to enter this photographic round to have a make over and photoshoot . Following the shoot the contestants images were shown on the Miss England website and Flawless voted for a Miss Photogenic which was awarded to Alice giving her TWO national awards in the contest . Alice finished 6th overall in Miss England 22.

2nd RUNNER UP IN MISS ENGLAND 22 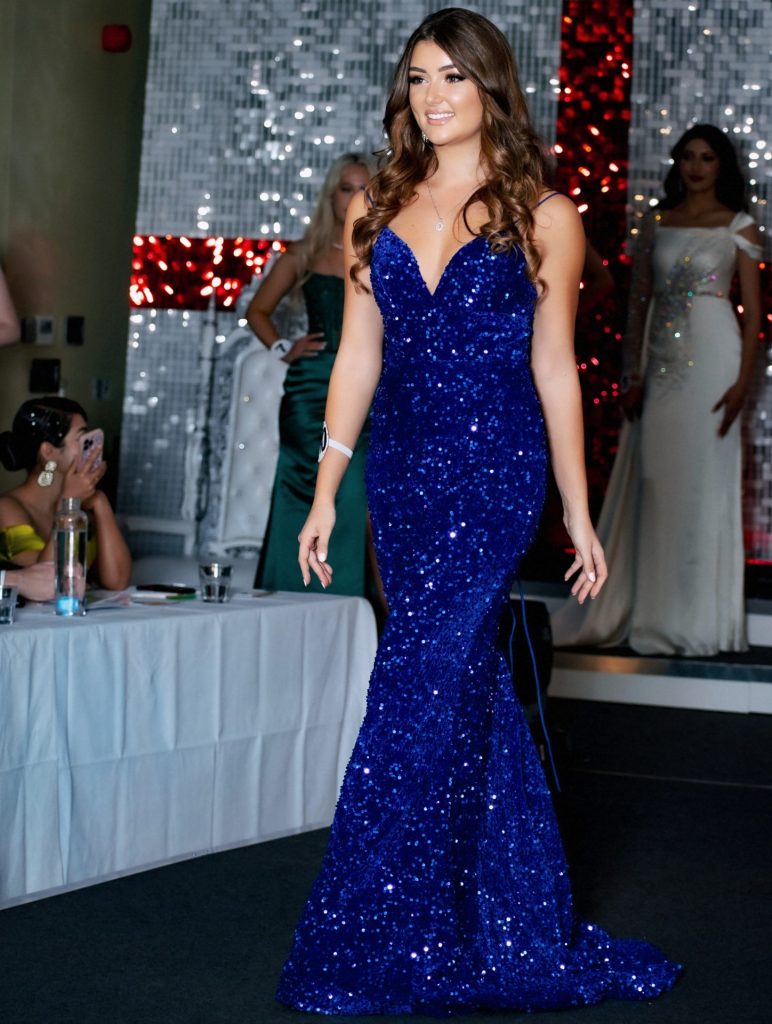 REACHING THE FINAL 12 & THEN THE TOP 3 IN THE MISS ENGLAND FINAL , EMILY WORE A BEAUTIFUL ROYAL BLUE GOWN AND ROCKED THE CATWALK ! Photo BAMBOO PHOTO LAB

Emily from Chelsea is a Chemical Engineering graduate and reached the shortlist in every single round in the Miss England Grand final ! 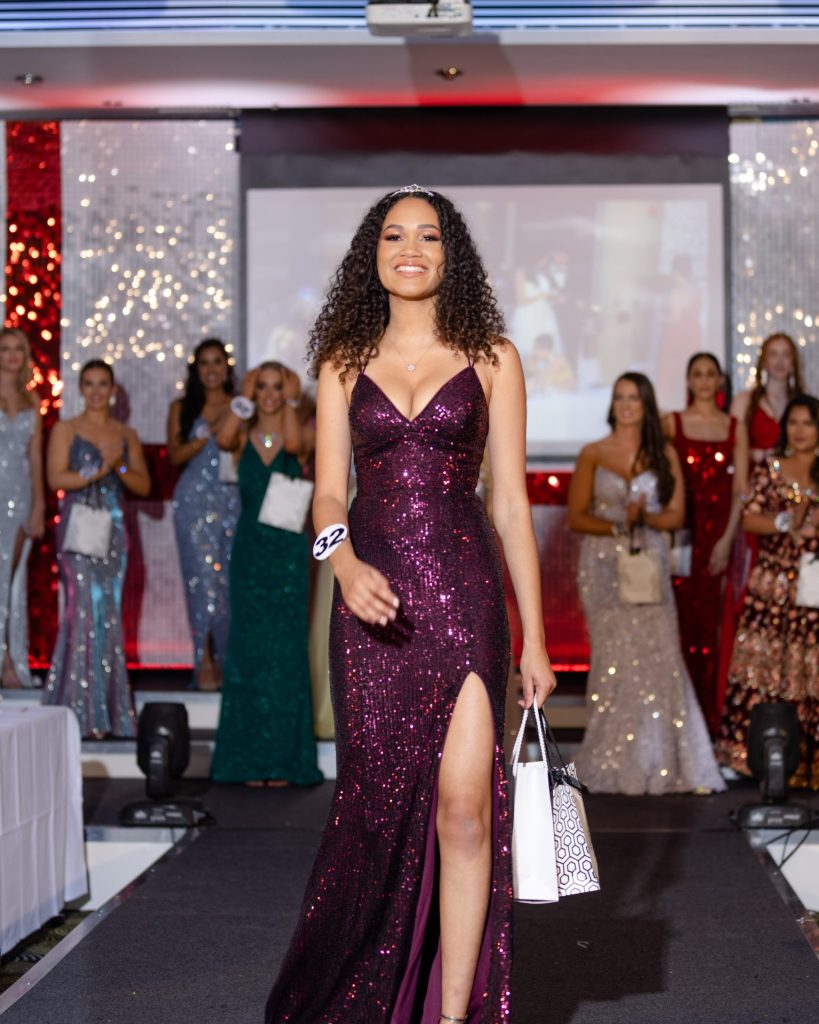 Stunning student Briana Smith (16) from Cumbria impressed the judges in the interview round and was voted in to the shortlist on the night of the Miss England grand final from the pre judging round . Briana also reached the final 12 in the Solaair Talent round ! Photo by Kam Murali at DK Pixels 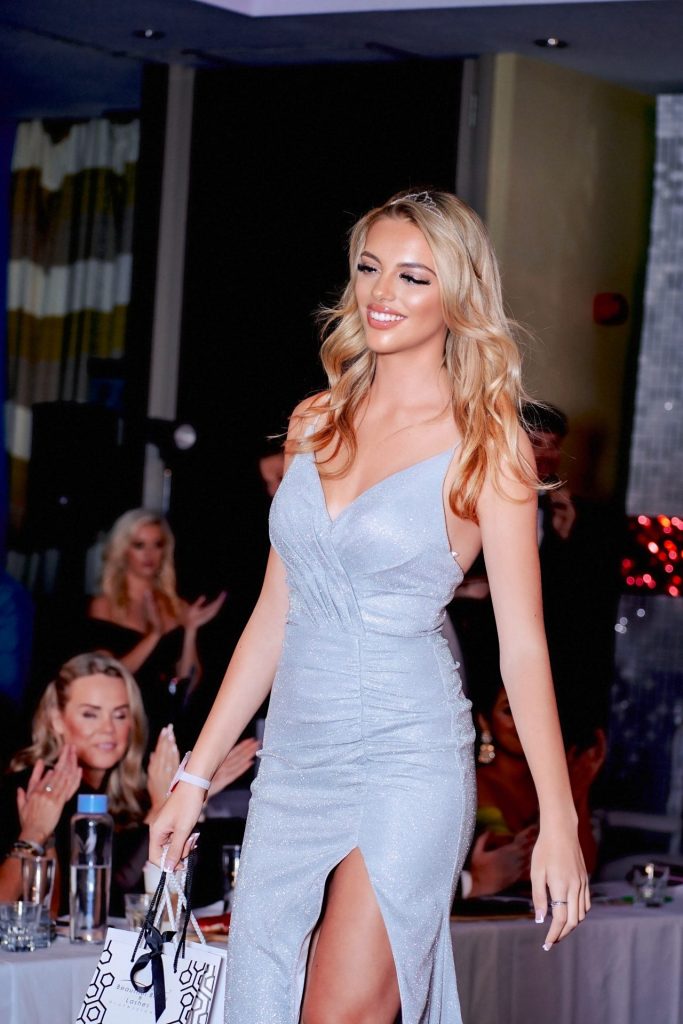 Alanta Richards (16) who lives on the border of Hamshire/  Farnham Surrey reached the final 12 in the Miss England final after revealing she had raised over £7,100 for Beauty with a Purpose along with reaching the shortlist in a number of the qualifying rounds ! Photo by BAMBOO PHOTOLAB