25 Facts you may (or may not ) know about MISS WORLD

By angie16th October 2019 No Comments

1.Miss World is the longest running major international beauty pageant, with the first taking place in 1951.

2. Its founder, Eric Morley, initiated the event in response to the Festival of Britain under way across the Thames. It has since grown into one of the biggest and best known events in the world.

3. Over one million women apply every year to take part in the national competitions, in the hope of becoming Miss World.

5. The Miss World event was first televised in full in 1959.

6.Miss World is the most watched annual television event, reaching over 2 billion viewers and broadcast in over 180 countries.

7. Since its inception, Miss World has raised over $500 million for numerous charitable causes under its ‘Beauty with a Purpose’ motto.

8. Though originally held in the UK, the Miss World finals have also taken place across the world, including Hong Kong, India, South Africa, USA, the Seychelles, Poland and China.

9. Although Venezuela and India have produced the most Miss Worlds, with 5 titleholders each. Europe has performed the best of all continents in Miss World, claiming 25 titles.

10. The Miss World crown was made by Garrards, jewellers of Queen Elizabeth II, and the crown is Miss World’s symbol of fundraising.

11. The first winner was Sweden’s Kiki Håkansson. She is also the longest reigning Miss World, holding the title for 16 months.

13. Oscar-winning actress Halle Berry represented the USA and was runner-up at Miss World in 1986.

16.Along with Halle Berry (Die Another Day) and Michelle Yeoh (Tomorrow Never Dies), no less than 11 Miss World finalists have gone on to appear in Bond films.

17. It was pure chance that reigning Miss World Ksenia Sukhinova entered the Miss Russia event: she was walking into a Moscow metro station when she was approached by a famous Russian photographer, suggesting she enter.

18.Julia Morley started the Miss World’s ethos Beauty with a Purpose in the 70s which is now a charity .

19.Miss World has brought substantial tourism to every country that has hosted it, with significant boosts to tourist numbers and increased international trade during and directly following the Miss World Festival.

22.In 1983 Sarah Jane Hutt from Weston Super Mare took the title for the UK, no other UK entrant has won since.

23.The reigning Miss World is “Toni Anne Singh” from Jamaica who won the title at the EXcel Centre in London . Piers Morgan was one of the judges

25.There is now a MR WORLD contest held by the same organisation every 2-3 years , to find the “Worlds Most Desirable Man”  . The reigning Mr World is “Jack Heslewood “ a qualified Rocket scientist from Bishops Stortford in Hertfordshire . Jack won the international title in the Philippines in August 2019. 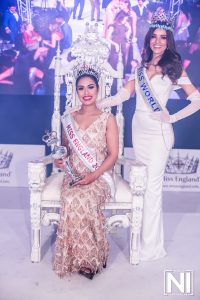 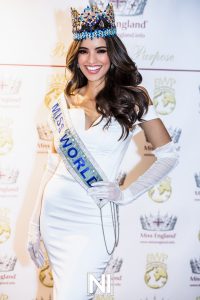 Pictured is ; The reigning Miss World”Vanessa Ponce De Leon” from Mexico who  attended the Miss England 2019 Finals won by “Doctor Bhasha Mukherjee” –  hosted by the Gainford Group in Newcastle Upon Tyne on August 1st 2019 & “Jack Heslewood” from England winning Mr World 2019 in the Philippines!